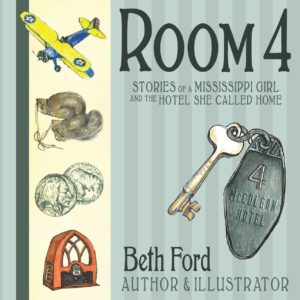 Stories of a Mississippi Girl and the Hotel She Called Home
Beth Ford (Author and Illustrator)
Paperback – Price $23.00 (+$6.00 S&H) USD.

Room 4, is a compilation of seventeen stories of vivid childhood memories by 87 year old author and artist Beth Ford who spent ten years from 1933-1943 growing up in the McColgan Hotel in McComb, Mississippi.

Each one of the stories captures a bit of Southern history and a child’s reaction to a world event… or a humorous observation of little Ella Beth’s recounting of her life in a bustling hotel in a small Southern town.

The small illustration on the page preceding each story gives a hint of the content. The boxing gloves that belonged to the famous African-American, Joe Louis, (known by the moniker, “Brown Bomber”) forecast the upcoming World Championship bout against the German fighter, Max Schmeling. This was not just another fight, but a power struggle between Democracy and Fascism in the upcoming years of war with Germany. On another level it was a Southern struggle of blacks vs. whites in those earlier years of racial division. “After a tumultuous build-up and anticipation, the fight lasted just 124 seconds!”

The small 1930’s radio is a typical symbol of communication in those days of how we heard the news and illustrates another global event. H.G. Wells’ book The War of the Worlds performed by Orson Wells and a cast of radio actors, electrified the world and a global panic ensued! This story is “The Broadcast”, which is about a Martian invasion and a fierce battle taking place on our planet. Since “Radio was King” and TV was in the future, the images were only “seen” in the minds of terrified people all over the world.

The drawing of the nickels preceded the “Jackpot” story and illustrated that slot-machines and gambling in Mississippi had to be hidden behind locked doors at that time. In certain states it was legal, but not in Mississippi… this applied to alcohol as well. “Of course, at the time I didn’t know “this” (slot machines) were illegal, I just enjoyed puling the handle with the big red ball on the end of it.”

The bi-plane on the cover of the book is from the story “The Aviator” and what happened to cause the stream-liner, The Panama Limited, not to be on time, which was unheard of. It was always exactly on schedule…

The 50 plus colored pencil illustrations were visualized by me, Beth Ford: Award-Winning Florida artist and author of Room 4. This is my first book.