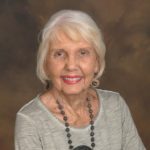 Beth Ford was born in Jackson, Mississippi and was raised early on in the McColgan Hotel in McComb, Mississippi. Beth (Ella Beth McAdams) graduated with the class of ’48 from Central High School in Jackson, Mississippi. She also attended the Ringling School of Art and Design in Sarasota, Florida as a teen. After several terms there, she attended the University of Mississippi where she was a freshman cheerleader for the Ole Miss Rebels. While there she met and married her husband of 65 years. After living in Jackson until the mid ‘50s, Central Florida became their home where they raised their three children. 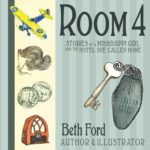 Room 4, is a compilation of seventeen stories of vivid childhood memories by 87 year old author and artist Beth Ford who spent ten years from 1933-1943 growing up in the McColgan Hotel in McComb, Mississippi.

Each one of the stories captures a bit of Southern history and a child’s reaction to a world event… or a humorous observation of little Ella Beth’s recounting of her life in a bustling hotel in a small Southern town.